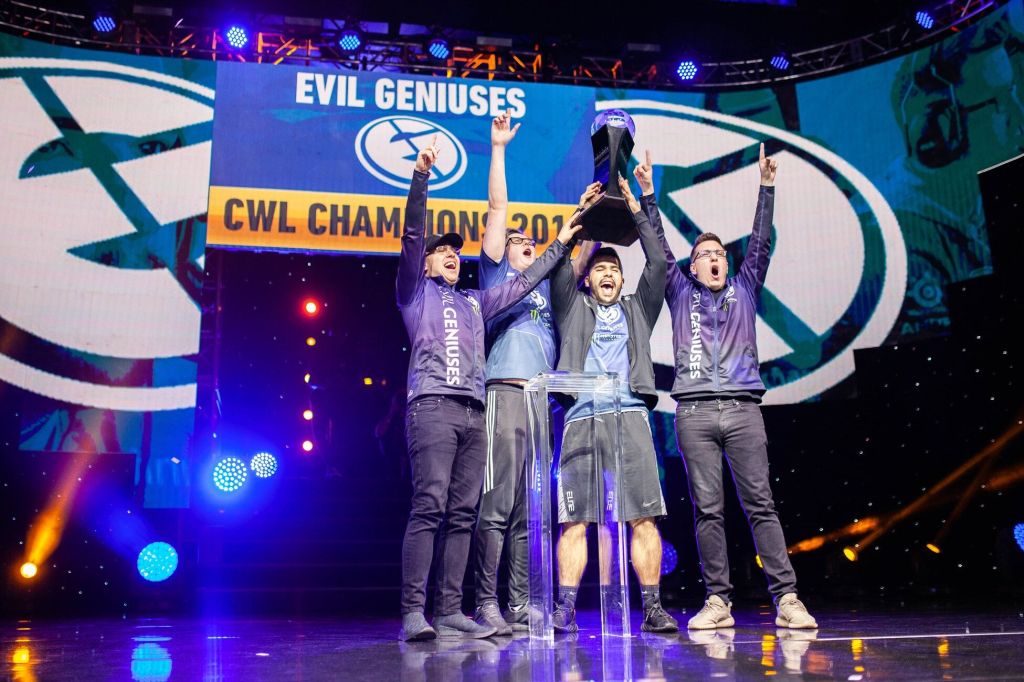 Superstars, stadiums, and such. Richard Tyler Blevins. Ever heard of that name? You are probably  familiar with his gaming alias Ninja, or NinjasHyper. If you’ve never heard that name, welcome to the fascinating world of eSports. Tyler Blevins is the poster child of modern competitive video gaming. One can argue that he’s a superstar – think of  Cristiano Ronaldo in Soccer or Lebron James in Basketball. Ninja is the embodiment of the stunning growth of competitive video gaming. From solo superstars to professional gaming teams, the eSport industry has evolved into a multi-billion-dollar business with millions of viewers and fans, just like mainstream sports. With some tournament prize-pools exceeding $24 million, there is little doubt that eSports have arrived. With large stadiums being custom built and gaming personalities achieving superstardom, where is professional video gaming headed?  Next stop Olympics?

Where it all started. Stanford University, circa 1972. Students competed in a video game tournament for a grand prize of a year-long subscription to the Rolling Stone magazine. It steadily grew until it exploded. The tipping point was pretty much when the internet became a thing and the Cyber Athlete Professional League was introduced in 1997. Games like Quake and Starcraft made a tremendous showing, with prize monies hitting 15000$ for the first time. Since then, business has boomed exponentially with no signs of slowing down anytime soon. In 2017, the tournament The International hit a record 24.6$ million prize.

Twitch, the money–making conduit. Twitch, the online gaming and social-media platform that allows people to live-stream their games to a worldwide audience, owned by Amazon, is a success story for the history books. This platform simply hasn’t stopped growing. Twitch draws as many or more viewers than major television networks. In fact, according to Forbes, “5 million daily active viewers spend 106 minutes daily watching live gaming.” Where does this fascination come from? Why do people enjoy watching live-streams of other gamers and even subscribe to a specific streamer for 5€ a month when it is actually free? Vicarious experience? Echoes of reality television? The same reason why people watch athletes kick around or throw balls, when they could actually go out and do it themselves. Superstars on Twitch, with hundreds of thousands of fans/viewers/subscribers are not just professional gamers. At their core they are entertainers. Ninja, Shroud, Summit1g and DrDisrespectLive are among the most famous streamers now and their combined audience across platforms is in the millions. Twitch has been, in many ways, a catalyst in the unrivaled boom of video gaming, video game viewing, and eSports.

Meet Tyler ‘Ninja’ Blevins. Though Twitch features over two million gaming broadcasters, Ninja is arguably the most famous one. His, like many athlete superstars, is a story of starting at the bottom and working his way to the very top. After graduating high school he entered tournament after tournament and made a name for himself by his dominating performance on the video game Halo3. But only after his entry into live-videogame-streaming via Twitch did his fame and audience explode. Thanks in part to the popularity Fortnite, Ninja entered the big leagues. When he duo-streamed with music superstar Drake, he created a new viewership record at Twitch with 628 thousand concurrent viewers and a new benchmark for the business. The combination of their respective communities created a watershed moment which Twitch has leveraged and replicated. During live presentations of Microsoft and Bethesda (a video game publisher) at the Electronic Entertainment Expo 2018,  2.9 million live viewers tuned into Twitch. Ninja, who reportedly makes more than half a million dollars per month, on Twitch alone, has become the face of eSports.

Packed stadiums and screaming fans. Welcome to the competitive gaming league of Overwatch featuring the 130 best players in the world. Overwatch is a first-person shooter game developed and introduced by Blizzard Entertainment in 2016. It quickly rose to become the fastest growing game in Blizzard’s history, with over 30 million players across platforms each year. The hype is real, so real that Barclays Center in New York was sold out during the Overwatch league finals. Across all platforms, it boasted a viewership of 11 million. With business booming, gamers’ salaries followed suit. Fortune reports that the lowest salary of an Overwatch league gamer is $50,000 a year and the winning team took home $1 million. Health insurance and other benefits are also thrown in. Does it sound like a dream job for an enthusiastic video gamer?

Investing in eSports. The boom in eSports has seen significant investments from multiple quarters. Arlington, Texas, for example, will soon open a 100,000 square foot stadium for competitive video gaming events. A typical gaming tournament is a digital spectacle. The target group is 18-34 years and the atmosphere has a music festival sensibility coupled with that of a tech fair, and the energy of a live sporting event. Investments run the gamut of infrastructure, talent acquisition, brand building, new product development, fan experience, and media management.

Universities get in the game. The world of eSports is so legit that universities are designing programs tailored to studying and managing eSports. The Ohio State University launched a one-of-its-kind, comprehensive eSports program with interdisciplinary curriculum aimed at teaching eSports Management, Game Art and Production, Game Design, Programming, and Health and Rehabilitation. It comes with a state-of-the-art arena. for eSports. In Germany, the University of Applied Management in Munich developed a full-time study program for eSports Management (B.A.) with a special emphasis on managing the Esport business, its teams, marketing and digital innovation within the gaming sector. A Swedish college is taking it to another level by only accepting top-skilled players who must prove themselves in a difficult admission procedure. These are select examples in what is a growing trend in new programs at universities. If Data Analytics  programs represented the most recent boom in university programs, now say hello to eSports programs.

The cautious entry of mainstream advertisers. Despite the unstoppable growth and popularity of competitive video gaming and the millions of users on video game streaming platforms, most major, mainstream advertisers don’t seem too confident about foraying into this world. There are a few notable exceptions. P&G’s Old Spice was the first brand to go big on Twitch with an innovative campaign that mined the reality television like aspects of Twitch. P&G’s Gillette followed suit more recently by sponsoring the mustachioed streamer DrDisrespect. Snickers got creative with their “You’re Not You When You’re Hungry” campaign, where gamers performed badly until they ate a bar of Snickers, and then dominated the game.

Why are major, mainstream advertisers hesitant to leverage eSports platforms, despite the immense potential for influencer marketing and the millions of dedicated gamers?Experts believe that this trepidation could be fueled by two things – 1) they don’t fully understand these platforms and their potential, and, 2) the primary audience – hardcore gamers. What about these gamers? Who are they?

A male dominated culture. Where are the women? According to a study by Twitch, 81.5% of its audience is male. Though the number of women in eSports has slowly yet steadily inched up, it still largely remains a boys club. Everything from gamers’ shared language to the depiction of female figures in video games screams sexism. The term, toxic masculinity, is often used by journalists and female gamers when describing the gaming culture and the inherent “violence” in video games. Not everything is bleak. The Philadelphia 76ers eSports team provides a rare yet compelling instance. It’s a female only team and a super successful one at that in the game Counter-Strike: Global Offensive. So is the story of a top-female player, Greguri, who was accused by some male colleagues of cheating. The reason? Well, she had superb reflexes which some male gamers refused to believe women can possess.  Greguri proved them wrong and built a massive fan base.

Despite these occasional bright spots, there’s clearly more progress needed. It is imperative that the industry pay more attention to bridging the gap between male and female players and be more welcoming of female players.  Could this explain the skepticism of mainstream brands?

Next stop, the Olympics? eSports at the Olympic Games. Now, that would be a milestone to eclipse all other milestones of this industry. eSport officials and lobbyists are pushing hard. As a matter of fact, there are ongoing talks with the 2024 Olympic Committee to include eSports as a demonstration sport at the Games. The Asian Games in Hangzhou, China will include eSport as a medal event. It doesn’t seem like a stretch, therefore, to see eSports at the Olympic Games. However, there is a concern about major video games which include virtual “killing” of opponents, which would go against Olympic values. There is little doubt that the conversations around women in gaming, and the violence depicted in video games, will become full throttled ones in the context of the inclusion of eSports in the Olympic Games.  These are conversations that the gaming community needs to encourage and foster.  Despite the seemingly unstoppable business growth, this industry may have some real growing up to do.

iThere are no comments

Quote of the Week

“Be who you are and say what you feel, because those who mind don’t matter, and those who matter don’t mind.” – Bernard M. Baruch

Begin typing your search above and press return to search. Press Esc to cancel.